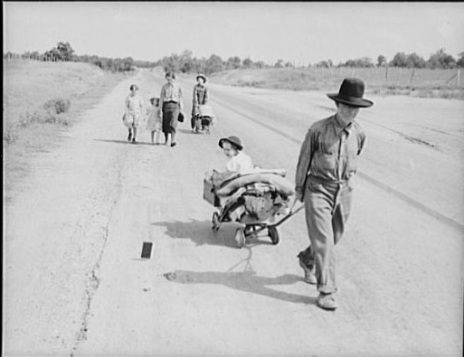 The stock market crashed on October 24, 1929 and the Great Depression began. President Franklin D. Roosevelt was elected in 1933 based on his promise of a New Deal for America. One of his new deal programs for rural people was the Farm Security Administration, or FSA. Roy Stryker, head of the Information Division of the FSA, was in charge of persuading the American people to support New Deal programs to aid desperate farmers. "The Farm Security Administration had been mandated by President Franklin D.
Roosevelt to assist American farmers who had suffered grievously during the Depression.  Families were stranded and starving; soil was worn out, unfit for production.  In addition to 'selling' the New Deal's agricultural programs to the public and to decision-makers in Washington, Roy Stryker had another mission--to thoroughly make an historical document of America, during these difficult times, with the use of photographs" [1].
Stryker hired a team of nine respected and experienced photographers – seven men and two women - to document the Great Depression and rural poverty. The two female photographers were Dorothea Lange and Marion Post Wolcott. The printed images were reproduced in newspapers and magazines as a form of propaganda for the FSA and New Deal programs. The FSA lost relevancy once America became involved in World War II, men joined the military, and a major issue was no longer unemployment but the labor shortage in factories across America.  The photographic unit of the FSA was subsumed by the Office of War Information (OWI) in 1942. The new focus was on promoting patriotism and recruiting women to work [2].  Esther Bubley and Marjory Collins were two photographers who worked under Stryker in the OWI until he left the office in late 1943.
The work of these photographers from 1935-42 was part of the greatest photography project in American history. According to the Library of Congress, the collection has 175,000 black-and-white film negatives, including those printed for use by the FSA-OWI and others that were not printed [3]